The funding comes as the CCF celebrate National Tree Week with multiple planting projects set to connect up vital woodland habitats for nature.  The projects will soon be highlighted on interactive maps on the Clyde Climate Forest’s new website launched today.

The Scottish Government’s Minister for Green Skills, Circular Economy and Biodiversity, Lorna Slater MSP, recently met partners at one of the new planting sites which will contribute to the pioneering urban forest initiative that will see 18 million trees planted by 2030. 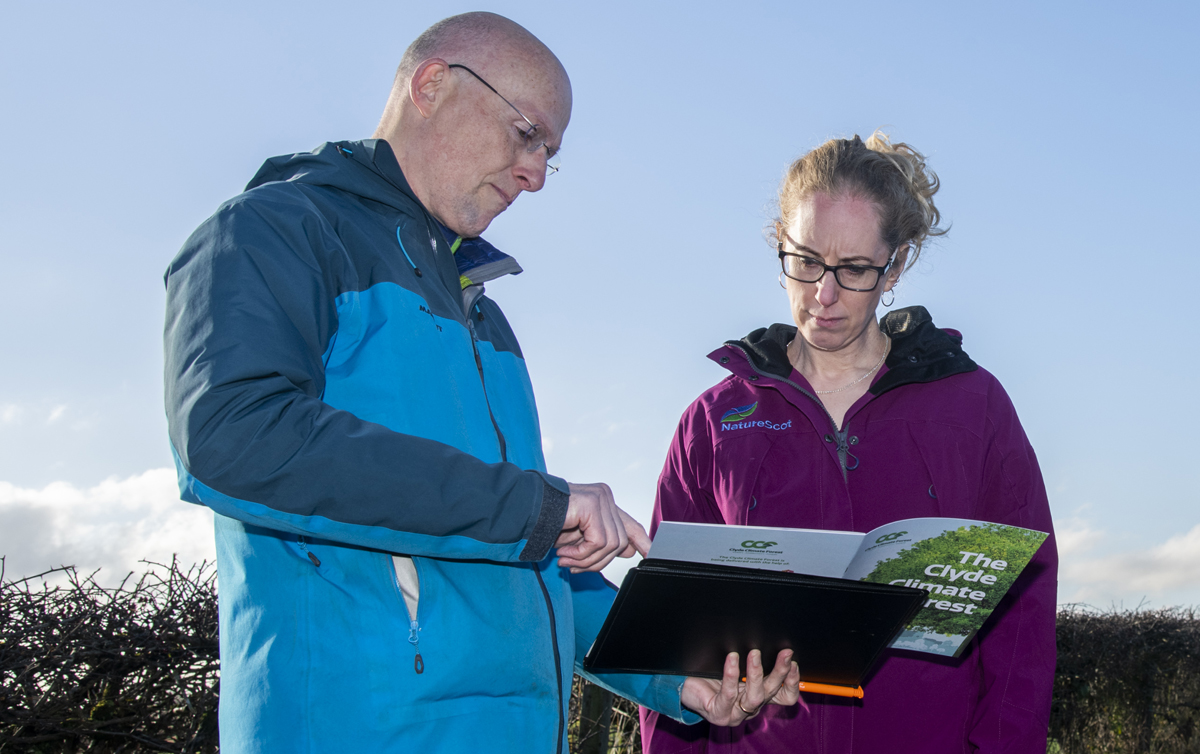 Forestry grant support for projects within the Clyde Climate Forest that help to connect up new and existing woodlands has been given a boost today.

Grant rates have been increased by £300 per hectare, and combined with funding through the Central Scotland Green Network grant, landowners can now receive up to £6,100 per hectare when planting new woodlands.

More than 200 target locations have been identified where new woodland creation will link up important habitats, making the wildlife that rely upon them better able to cope as the climate changes.

The Clyde Climate Forest initiative is aiming to have around 18 million trees planted across the Glasgow City region, from Inverclyde to South Lanarkshire, over the next decade. 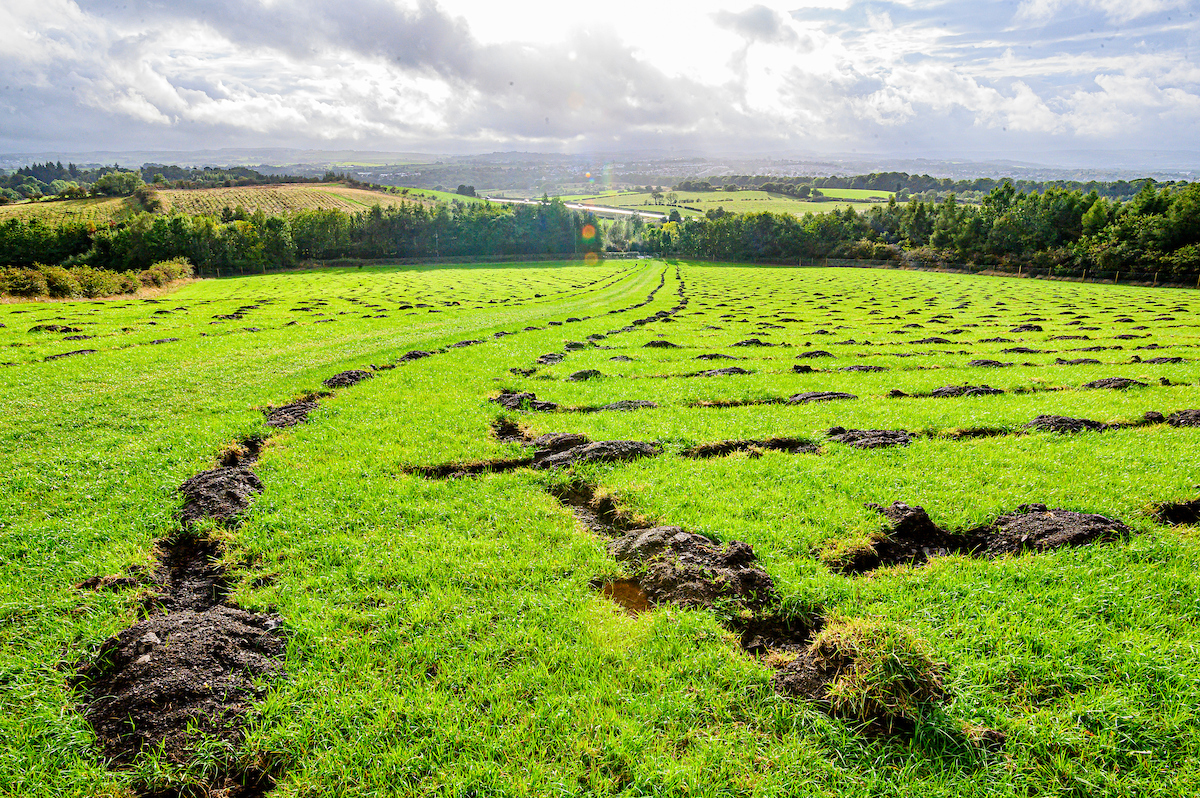 Landowners have an added incentive to plant native woodland and expand the Clyde Climate Forest to benefit wildlife and the wider environment.

Peatland restoration has a key role to play in achieving the region’s Net Zero ambitions. Restoration locks up carbon and reduces the anticipated impacts of climate change, such as flooding, by storing carbon for longer and slowly releasing water after heavy rainfall.

Peatland is also a priority habitat and home to unique plants and animals, and restoration will help to address the nature crisis and the dramatic decline of wildlife.

Almost a fifth of Scotland is covered in peat, but around 80% of that is degraded through drainage, extraction for fuel, tree planting and currently emits carbon rather than storing it.  Scotland’s peatlands emit nearly the same amount of carbon as is released from its 2.5 million homes each year.

Glasgow City Region has around 50,000 hectares of peatland, almost the same area as the whole of North Lanarkshire, covering 15% of the region.  This represents a huge opportunity in the fight against the twin climate and nature crises, and Clyde Peatlands will lead on the drive to deliver on that opportunity.

Clyde Peatlands is supported by NatureScot through the Peatland ACTION fund and two new Clyde Peatland officers will join the GCV Green Network team to deliver a programme of peatland restoration across the eight Glasgow City Region authorities. These posts will be hosted by South Lanarkshire Council on behalf of Glasgow City Region partners. The officers will target public and private landowners in priority locations and support them in planning, designing and funding potential restoration projects.

Over the next decade, ten trees for every man, woman and child in Glasgow City Region will be planted as part of a new urban ‘forest’ to tackle climate change.

The ambitious planting pledge lies at the heart of the new Clyde Climate Forest, which is part of the Glasgow & Clyde Valley Green Network, and will breathe new life across the eight local authorities in the region.

Around 18 million trees will be planted over the next decade, increasing woodland cover in the region from 17% to 20%.

The move is being viewed as an ideal opportunity for Glasgow City Region to demonstrate its commitment to reaching Net Zero, as it hosts COP26 in November. 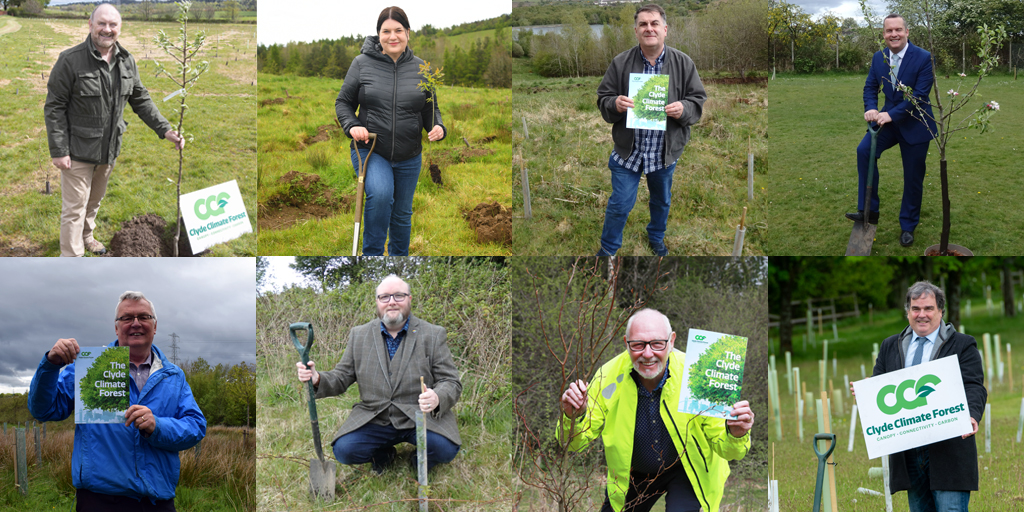 The Clyde Climate Forest initiative is endorsed by all eight Council Leaders in Glasgow City Region.

The planning system has an important role to play in safeguarding existing Green Infrastructure and securing delivery of connected, accessible and well designed new GI, this brochure highlights the key policies to help achieve this.

Launching the brochure, Max Hislop, Manager of the GCV Green Network Partnership said ‘Green Infrastructure is integral to successful placemaking and must be designed in to development proposals from the outset. Our guide is based on the Partnership’s analysis of Local Development Plan GI policies across Central Scotland and we hope the brochure will help to improve the drafting of policies for future Plans’. 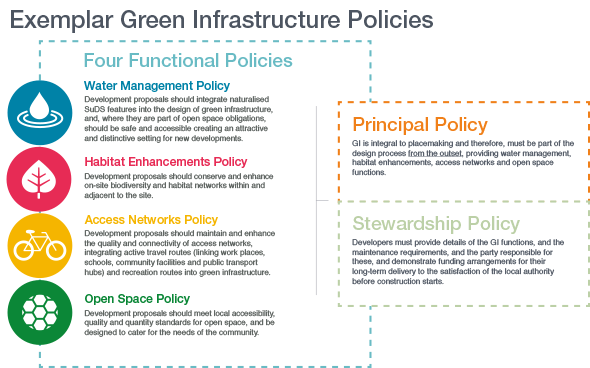